skip to main | skip to sidebar

A group of workers camped around a fancy Audi, surrounding it in order to force the owner of the car to pay wages owed to them (h/t China Digital Times).

The picture speaks volumes about the social condition that Chinese mig 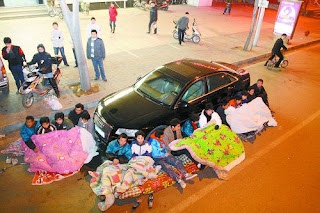 rant workers endure—overworked, underpaid, unappreciated, and at times violated. What is more, it epitomizes a social phenomenon where a class of people who are unaware of (or unable to utilize) another tool to exercise their rights to be paid for their blood and toil—the law.

For want of justice, people can resort to self help or the law. As the migrant workers often do, self help appears to be the most sensible and accessible method of achieving justice. A plausible reason for their tendency to self help is that they do not have the money to hire lawyers; and they probably do not know to report the violators to the proper authorities, thus availing themselves of administrative assistance. Or, they do not have faith in the legal system in its ability to dispense justice to poor migrant workers. Irrespective of the reason, this phenomenon reveals an undeniable weakness in the Chinese legal system—the poor, the weak, and the disenfranchised do not have easy access to it. (Of course, this is not a problem unique to China.)

Other Blogs and Sites